Oh my, I forgot to post the physical blog posting with episode links a month ago! These all got uploaded on Libsyn at the end of June, to fill up feed space & justify the monthly cost I pay at Libsyn to host the podcast. So jump in your time machine & head back to 2015 & 2016, to an era that seems like a lifetime ago & enjoy six "classic" episodes from the original run of the podcast.

First up was an episode that discussed the Golden Age All-Star Comics series, complete with me reading an introductory missive written by Roy Thomas, you can listen to that episode here: RCS Classic: JSA/All-Star Comics Intro (2015)

Next up is another episode from 2015, where I look at Adventures in the DC Universe #10, an often overlooked gem of series with comic adventures set in the then young DC Animated Universe. This particular issue was a Legion of Superheroes adventure that marked their debut into the DCAU. You can check it out here: RCS Classic: Adventures in the DCU #10 (2015)

Another episode covering a mid 90's DC book is this episode where I jump into New Gods #12, which marks a bold new direction for the series when John Byrne takes over both writing and art duties on the series. You can check it out here: RCS Classic: New Gods #12 (2015) 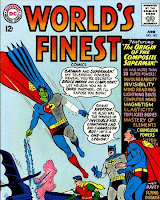 Next up, I re-uploaded an episode from 2016 where I took a look at World's Finest Comics #142, the debut of the Composite Superman, the bane of Shag Matthews and Rob Kelly's podcasting existence! You can check out my recap of that daring adventure of the Superman & Batman team here: RCS Classic: WF #142 Composite Superman! (2016)

Next up, was an episode where I shared my love for Kirby's Silver Age Thor work at Marvel, and give a rundown of the crazy web of Thor reprints in the Bronze Age. All that plus classic KISS God of Thunder goodness can tickle your eardrums here: RCS Classic: God of Thunder, King of Comics

And finally this time out, I had my 2015 4th of July Super Spectacular episode, an episode looking at one of my favorite Captain America issues of all-time, the mid-70's return of Jack Kirby to Marvel & the character he created 35 years earlier, Captain America #193 MADBOMB!!! In the episode I also tackle some classic issues of Invaders starring the British super-team the Crusaders, a team made of Golden Age Quality Comics Analogs, with a Nedor/Standard Fightin' Yank analog thrown in for good measure. You can catch of that Bronze Age flag-waving goodness here: RCS Classic: 4th of July Spectacular (2015)

Thank you very much for listening. Feeback for the podcast can be left here at the blog, by tweeting me @KyleBenning_Art, by leaving an iTunes review, or by visiting the King-Size Comics Giant-Size Fun Facebook page. This podcast is made for entertainment purposes only. All songs, sound clips, and characters discussed are copyright of their respective copyright holders, and no infringement is intended, so please don't sue me.

Posted by MetropolisKid41 at 8:25 AM No comments: