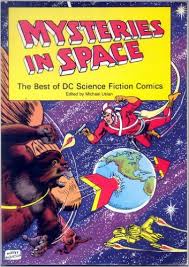 Welcome back to another episode of King-Size Comics Giant-Size Fun, join me your host, Kyle Benning this time out as I help celebrate the legacy of the late, great Murphy Anderson. This is my contribution to the #RIPMurphy Podcast Crossover, celebrating the career and artwork of the fantastic & revolutionary artist Murphy Anderson, who passed away at the age of 89 on October 22, 2015.

As my contribution to the crossover, I'm covering the Captain Comet story, "Guardians of the Clockwork Universe" from 1952"s Strange Adventures #22.

As always, you can subscribe to the podcast via iTunes or download the episode directly here: King-Size Comics Giant-Size Fun Ep 025 Murphy Anderson Tribute

Feedback for the podcast can be left here at kingsizecomicsgiantsizefun.blogspot.com, on Facebook at the King-Size Comics Giant-Size Fun Facebook Page, or by emailing me directly at kylebenning41@yahoo.com.
Posted by MetropolisKid41 at 9:39 PM