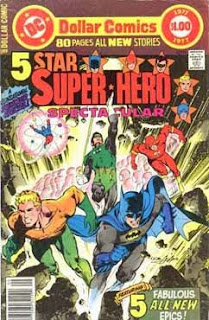 Do you like over-sized comics? Comics with extended page counts like DC’s 80 Page Giants, 100 Page Super Spectaculars, and Dollar Comic Giants or Marvel’s King-Size Annuals, Giant-Size Specials, and Double-Sized Issues? How about the physically larger Treasury Comics? Then welcome to the King-Size Comics Giant-Size Fun Podcast, join me your host, Kyle Benning, on a one man mission to brave the elements and review over-sized comics in my car during my lunch hour.

Welcome to the 22nd Episode of King-Size Comics Giant-Size Fun Podcast! Wait...What?!?!?! 22nd Episode? What happened to the 21st episode?!?! That's right, this one is a special out of order time travel episode, that appears out of order, but I have a good reason why!!!

As always you can subscribe to the podcast via iTunes, or download the episode directly here: King-Size Comics Giant-Size Fun Ep 22 Conway X-Over

This is a very special episode where I'm joined by the Podcasting Legend, Rob Kelly of the Fire & Water Podcast Network. Rob also regularly contributes to Back Issue Magazine, writes the digital first comic Ace Killroy, as well as runs the comic blogs the Aquaman Shrine, the Justice League Satellite, the Power Records Blog, and the Treasury Comic blog.

Rob joins me to talk about a very hot and important topic, creator equity, in a series of Podcast Episodes known as the Conway Xover. This is in response to some of the concerns that legendary comic book writer Gerry Conway brought into the spotlight a few weeks ago, a problem and change in policy by DC Entertainment that has been plaguing Conway and other comic creators like Alan Brennert. A whole lot of podcasts are participating, and you'll find links to those below! As part of the Conway Xover event, I also guest appeared on Episode 31 of the Super Mates Podcast, the husband and wife geekcast hosted by Chris and Cindy Franklin. On that episode we talked about Conway's contributions to Superman Family #186 & 187. I want to send out a big thank you to the Franklin Family for having me aboard their fine podcast, we had a load of fun in our coverage of 2 fine Dollar Comics issues.


I want to thank Rob Kelly again for stopping by, he put up with my sleep deprived rambling (last week was a long one for me folks) to bring some sort of coherence to my rambling. Rob is a busy man, and I really appreciate him taking the time to join me and improve the quality of the podcast. My recording also crapped out and Rob saved the day with his back-up recording! You rock Aqua-Rob!

Superman & Batman Podcast - Michael Bradley (organizer of this entire event!) w/guest Aaron Moss  - Superman/Batman teamup from World's Finest #269, plus the Conway-written Red Tornado story from the same issue. Will be out May 19 or 26.
http://www.greatkrypton.com/

From Kid to Flash (Mythmaking ETC) (Chris Ivey) - Planning on making episode 18 of my Wally West series my #ConwayXover contribution. Moving up Secret Society of Supervillains #8 and #9 (1977) in the schedule to tie in with the event. May 18th release. http://mythmakingetc.blogspot.com/2015/05/from-kid-to-flash-18-conwayxover.html
The Hammer Podcasts! (Gene Hendricks) - Episode 12 covering Thor 224, scheduled for release on or around May 18th. (Podcast Page: http://twotruefreaks.com/shows.php?show=35) Episode Link: http://twotruefreaks.com/media/podcasts/TheHammerPodcasts/mp3/THP-Episode012.mp3
Quarter Bin Podcast (Alan Middleton) - JLA #188,released Tues 5/19.  http://relativelygeekypodcast.blogspot.com/2015/05/qbp-052-justice-league-of-america-188.html
Between The Pages Blog (Karen Williams) - The Sweet Superhero Stories of Gerry Conway will focus on his work on Amazing Spider-Man and the Justice League of America.  The stories I plan to touch upon are the Death of Gwen Stacy, the original clone saga, 1st appearance of the Punisher, Superman vs. The Amazing Spider-Man, The JLA / JSA / New Gods, the JLA / JSA /Secret Society of Supervillains, JLA 200, and Justice League Detroit.
http://betweenthepagesblog.typepad.com/between-the-pages-blog/2015/05/the-sweet-superhero-stories-of-gerry-conway.html

Back to the Bins Podcast: Paul Spataro & Crew, episodes drop Saturdays and are available on iTunes & at the Two True Freaks website. http://twotruefreaks.com/shows.php?show=1

Feedback for the podcast can be left here at the blog, on iTunes via an iTunes review, emailed to me at my email address kylebenning41@yahoo.com, or on Facebook:King-Size Comics Giant-Size Fun Facebook Page
Posted by MetropolisKid41 at 9:39 PM