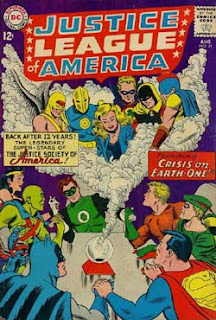 The Justice Society of Earth-2, Golden Aged Costumed Heroes defending freedom against Axis Forces and costumed villains that prey on the weak.


The Justice League of America of Earth-1, heroes born out of the atomic age and space race defending the world from colorfully costumed villains and evil cosmic conquerors.


There would then come a time when these costumed heroes would answer an even greater calling, to save not only their own world, but parallel worlds with alternate versions of themselves. Two Generations of costumed heroes on two separate parallel earths, teaming-up to save millions, and so began the exploits of the Earth 2 Justice Society and their Earth 1 Justice League counterparts, in a series of crossover adventures that can only be described as CRISIS ON MULTIPLE EARTHS!
Welcome to the 4th Episode of the Crisis on Multiple Earths Podcast, the podcast where I explore the Silver & Bronze Age Crisis on Multiple Earths crossovers between the JLA heroes of Earth-One and the JSA heroes of Earth-Two. This time out we have the first full-on crossover between the JLA and JSA teams, courtesy of the 2-parter in Justice League of America #21 & 22 from the summer of 1963.
As always, you can download and subscribe to the podcast via iTunes, or directly download the episode here: Crisis on Multiple Earths Ep 004 JLA #21 & 22 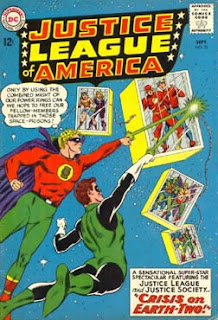 As I mentioned in the episode, I have re-released the first 3 episodes of the Crisis on Multiple Earths Podcast in MP3 Format, those are available for download at the below links:


Thank you very much for listening. Feedback for the podcast can be left at the blog kingsizecomicsgiantsizefun.blogspot.com, by emailing me directly at kylebenning41@yahoo.com, by leaving an iTunes review, or by visiting the King-Size Comics Giant-Size Fun Facebook Page
This podcast is made for entertainment purposes only. All songs, sound clips, and characters discussed are copyright of their respective copyright holders, and no infringement is intended.

Email ThisBlogThis!Share to TwitterShare to FacebookShare to Pinterest
Labels: Crisis on Multiple Earths