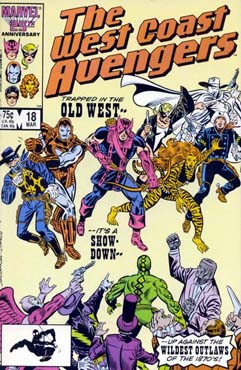 Welcome to the 27th Episode of Random Comic Showcase, the Podcast where I look at some other element of comics or geek culture that doesn't fall into the normal format of any of my other shows on the feed. This time out, I have 2 episodes for you in this one blog post, dedicated to some random comic finds and the joy they brought me. As my buddy Shag Matthews always says, you have to "find your comic book joy," and for me personally, there's no better way to do that than assorted grab bags of comics, especially when they yield relatively self contained "one-and-done" stories. I was surprised to come across random assorted comic 4-packs at Walmart the other day, picked a couple up, and found a number of assorted gems inside, including West Coast Avengers #18, by Steve Englehart, Al Milgrom, and Joe Sinnott. It was a glorious fun romp! What a fun & exciting action packed comic! The West Coast Avengers team get time displaced to the 1870's Old West where they team-up with Two-Gun Kid, Rawhide Kid, and Night (Ghost) Rider.


This takes me back to being a kid, where I would find quite the assortment of random comics at garage sales, on the newsstand, or in comic 4-packs similar to these I've been finding at Wal Mart. You never know what you're going to get out of these mystery bags, but it's a blast diving in and finding a random single issue story be so much fun!

So give these  two episodes a listen, in this episode I open 2 more packs, as well as reflect on some of the contents I read from the first set of packs. In both episodes I reflect & reminisce on collecting comics in my youth, and the fun nostalgic trip that these comics took me back on. I'm grinning ear to ear as I open these comics, and have had a blast sampling this random assortment of Marvel comics from the 1980's and 1990's.
As always, you can listen to the podcast by subscribing to the King-Size Comics Giant-Size Fun Podcast Feed on iTunes, or by downloading the episodes directly here:RCS Ep 027 You Never Know Where You'll Find Comics Part 2


During this episode I mentioned my pal Clinton Robison's blog, Coffee & Comics, where his most recent blogpost covers an issue of April O'Neil that was a 3-issue tie-in series to the ongoing TMNT Adventures series that Archie put out. If you like my podcast, and especially if you liked kind of the random nature of these 2 episodes, and some of the off-the-wall comics I talked about here, odds are you'll love Clinton's fine blog, where he likewise takes a similar random look at a lot of comics from this 1980's and 1990's era. You can find his blog here:Clinton Robison's Coffee & Comics Blog


Thank you so much for listening, feedback can be left here at the blogpost, on the King-Size Comics Giant-Size Fun Facebook Page, by sending me a tweet at the Twitter handle @KyleBenning_Art, or by emailing me at kylebenning41@yahoo.com.
Posted by MetropolisKid41 at 4:42 PM