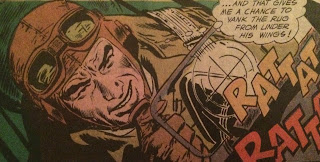 Welcome to the second episode of the newest show here on the King-Size Comics Giant-Size Fun Podcast feed, WAR IS HELL, a podcast devoted to the War Comic Stories published by DC Comics.

This second episode is released on June 14th, 2016, which is also Flag Day, the anniversary of when the US Flag was adopted in 1777 and also the anniversary of the US Army, which was formed on this day in 1775. To celebrate Flag Day and further look at the fantastic sampling of DC's War comics offering, I take a look at "Tank For Beach Green" by Bob Haney and Joe Kubert, which was originally published in 1956's Our Fighting Forces #12.

As always, you can subscribe to the podcast via iTunes under the King-Size Comics Giant-Size Fun podcast feed, or download it directly here: WAR IS HELL Ep 002 "Tank For Beach Green"

Thank you to all of our brave service members, past and present, who have protected our freedom. All gave some, some gave all.

Thank you so much for listening, feedback can be left here at the blogpost, on the King-Size Comics Giant-Size Fun Facebook Page, by sending me a tweet at the Twitter handle @KyleBenning_Art, or by emailing me at kylebenning41@yahoo.com.
Posted by MetropolisKid41 at 9:33 PM

Email ThisBlogThis!Share to TwitterShare to FacebookShare to Pinterest
Labels: War Is Hell