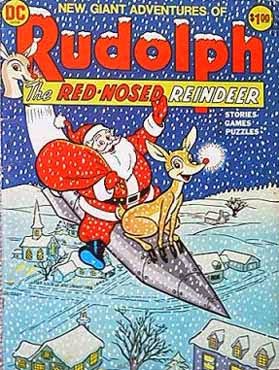 Over-Sized Comics can mean a couple of things, extra-long issues that had more pages than a normal comic book at the time, whether that was a “Double-Sized” issue, a “King-Size Special,” an 80 Page Giant, 100 Page Super Spectacular, or any of the other iterations like Marvel’s Giant-Size books or DC’s Dollar Comics that flourished in the Bronze Age, the result was the same, more bang for your buck! The books had higher page count, at a higher price, but still a bargain when comparing the total page count for the cover price. Typically it would break down to getting something like the page count of 3 regular comics for the price of 2, or 4 for the price of 5, however it broke down, you were getting a deal by buying in bulk when you went the route of the larger page format. Some of these over-sized issues had all-new content, some were strictly reprinting older material, and others were a mixture of both. But DC and Marvel also literally had Over-Sized comics in the Treasury Format, where the pages were actually much larger! These Treasury Comics also varied in content, from the all new, to the strictly reprint, as well as the combination of both. And then there were the Digest Size comics, the “Biggest Little Buy in Comics” as DC liked to tout on their Digest Covers, 100 Pages for $1 or less, almost strictly reprinting past material, on a smaller page size and wrapped in a typically all-new original cover. So regardless how you personally classify the “Over-Sized Comics” from Marvel and DC throughout the 60’s, 70’s, 80’s and yes even the 1990’s and 2000’s, whether that is an extended page count or actually larger print format, you can find their coverage here, on the King-Size Comics Giant-Size Fun blog and podcast. And as the heading to this post promises, here is a timeline of what Over-Sized series Marvel and DC have published, and when they were hitting newsstands and spinner racks around the country.

-DC ANNUALS 1960-
The first foray into over-sized comics goes to DC Comics, which began the concept of the 80 page Annual in 1960, even though they printed these ‘Annuals’ twice a year for characters like Superman. From 1960 to 1964 DC released 22 Annualswhich consisted of reprinted material starring characters like Superman, Batman, Flash, Rudolph, Sgt. Rock, and Lois Lane.

-MARVEL ANNUALS 1962-1964-
Meanwhile, after the success of Fantastic Four #1, Marvel Comics exploded onto the Silver Age Super-Hero comics scene, rising from the ashes of Atlas & Timely comics. They entered into the over-sized Annual publishing in 1962, with the first Strange Tales annual, a 72 page ‘Triple Value’ comic. Marvel steadily added to their Annual offering each year, with Fantastic Four annuals starting in 1963 and Amazing Spider-Man annuals a year later. Marvel released 6 Annuals over this 2 year stretch spanning July 1962 through July 1964.

-DC 80 PAGE GIANTS 1964-1971-
DC dropped the Annual title but kept the 80 Page Reprint formatthey started 4 years earlier. In fact 80 Page Giant #1 was originally solicited as Superman Annual #9 in DC House Ads, but DC decided to switch things up and release a new series. And thus came the 80 Page Giant Series, which was designated by the letter G and the issue number, so the first 80 Page Giant issue, starring Superman, was G01. This series ran for 15 issues, but the format then continued into the pages of several DC Ongoing series. The covers still carried the 80 Page Giant heading and also kept the G style numbering in addition to the Ongoing Series numbering. For example, Justice League of America #39 also carried the G16 designation on the cover. Eventually the 80 Page format was dropped, but the series continued with the G numbering scheme and the word “Giant” on the cover. The series spanned 93 issues and ended in August of 1971.

-MARVEL KING SIZE ANNUALS & SPECIALS 1965-1982-
In 1965, Marvel continued to publish and increasing amount of Annuals every summer, but each cover now touted “King-Size Annual.” June of 1965 saw the release of Amazing Spider-Man Annual #2, Fantastic Four Annual #3, and Sgt. Fury Annual #1 all sporting this “King-Size Annual” heading. In 1966 that heading became “King-Size Special.” They would keep this designation until the mid-1970’s when they all once again touted the heading “King-Size Annual.” Slowly the Marvel Annuals began to drop the “King-Size” heading all together, with the last annuals to carry this title being published in August of 1982. During this lengthy 18 year span, Marvel published 133 Annuals with either the King-Size Annual or King-Size Special designation.

-MARVEL COLLECTORS' ITEM CLASSIC 1965-
In October 1965 Marvel launched their first series focused on reprinting the hit superhero comics that had quickly thrust them into one of the top comic publishers in the country 4 years prior. They introduced the anthology reprint series Marvel Collectors' Item Classic, which reprinted some of what are still considered Marvel's most iconic and important comic stories today, for the very first time. These jumbo 64 page reprint issues typically reprinted four full length comic stories from the very early stages of the "Marvel Age of Comics" featuring the Fantastic Four, Iron Man, the Incredible Hulk, Dr. Strange, and more. The series would be appropriately renamed Marvel's Greatest Comics with issue #23 in July of 1969, but keep the over-sized 64 page format until issue #35, which hit stands in October of 1971, where the comic became solely a Fantastic Four reprint series and reduced its page count to 48 pages, and then dropping another 16 pages with issue #36.

-MARVEL FANTASY MASTERPIECES 1966-1972-
With the success of Collectors' Item Classic, Marvel sought to further capitalize on the reprint market, and soon introduced a new reprint comic series, Fantasy Masterpieces, which first hit stands in December of 1965. The first 2 issues were 32 pages and reprinted short stories from Marvel's very popular anthology comic series like Strange Tales and Tales to Astonish. With issue #3 which hit stands in April of 1966, the series doubled in page count to 64 pages and began incorporating comics that were originally published by Marvel's predecessors Timely and Atlas in comics from the 1940's. The series would take on a new format and name with issue #12, which also marked the first appearance of Marvel's Captain Marvel (Mar-Vell), and feature a mixture of reprinted material and new stories under the new name Marvel Super-Heroes. The series would maintain the 64 page count until issue #32 in June of 1972, which returned to the 32 page count that the series launched with.

-Other DC Over-Sized Books from the 1970’s-
This heading serves as a catch-all for the number of other over-sized comics DC published throughout the 70’s, whether that was the short-lived DC Super-Giant series, or just the occasional “Giant” issue of a regular ongoing series.

DC Published a grand total of 217 issues across a wide array of genres in the extended page format. The books launched with an 80 Page count (including the covers and no ads), a distinguished trade dress, and were a ¼” taller than the rest of the comics they published. At the time (late 1976) most comics cost 35 cents, so with the Dollar Comics, you got roughly the same number of pages as 4 regular comics for a little less than the price of 3. Following the DC Implosion in 1978, the page counts were reduced and ads re-introduced back into the books, however they would become ad-free again in 1980.

-Marvel Double-Sized Annuals 1984-1986-
Marvel would once again return to a size designation on their annuals. After a couple of years of being called just annual, Double-Size Annual graced the covers in a distinguished Trade Dress for 3 summers in the mid 1980’s. Starting in 1988 Marvel would make their summer annuals part of a crossover event.