King-Size Comics Giant-Size Fun Episode 010 Whatever Happened to the Man of Tomorrow? 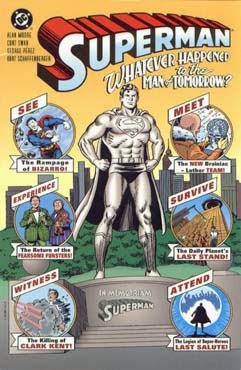 Do you like over-sized comics? Comics with extended page counts like DC’s 80 Page Giants, 100 Page Super Spectaculars, and Dollar Comic Giants? Or how about Marvel’s King-Size Annuals, Giant-Size Specials, and Double-Sized Issues? How about the physically larger Treasury Comics? Then welcome to the King-Size Comics Giant-Size Fun Podcast, join me your host, Kyle Benning, on a one man mission to brave the elements and review over-sized comics in my car during my lunch hour.

As Always, you can subscribe to the podcast via iTunes or download the episode directly here:King-Size Comics Giant-Size Fun Episode 010

In today’s episode I’ll be covering one of the most commonly praised, and highly touted Superman short stories of all time. Does it live up to the Hype? Let’s find out. I’m reading the story today from the Prestige Format 64 page collected edition that hit stands on December 4th 1996 and sporting a Curt Swan and Murphy Anderson cover and a $5.95 Price Tag.

Whatever Happened to the Man of Tomorrow was a two part story printed in the final issue of Superman and Action comics before the post-Crisis Reboot of Superman. This was Superman #423 and Action Comics #483, released on June 12, 1986 and June 26, 1986 respectively. These two issues were collected and released together for the first time in the prestige format “Superman: Whatever Happened to the Man of Tomorrow #1” issue that was released on December 4, 1986, so 10 and half years after it was originally published. And that is the way I’m reading and covering this story today, from this prestige bound edition that marked the story’s first reprinting.

As always, I love feedback, you can leave it here at the blog, a review on iTunes, email me directly kylebenning41@yahoo.com, or now comment on our Facebook page, which can find by searching for King-Size Comics Giant-Size Fun or follow this link: https://www.facebook.com/ComicsRetroReview